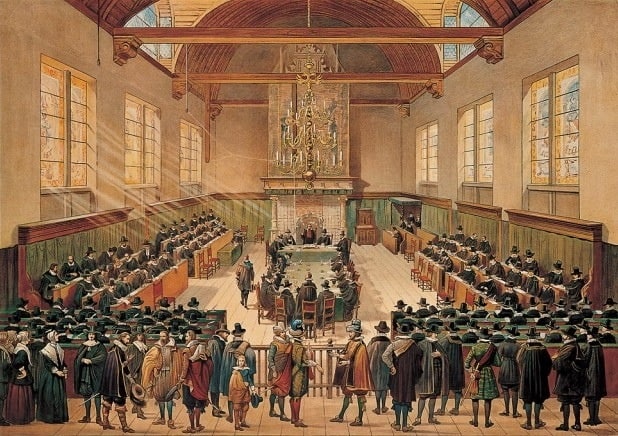 By the opening years of the seventeenth century, the Reformation had turned European Christianity into a conglomeration of conflicting sects. The Roman Catholic Council of Trent drew a firm line between Catholics and Protestants by declaring that Roman Catholic tradition represents the final authority when it comes to interpreting the Bible.

In 1618, a war between Protestants and Catholics broke out when some Protestants tossed two Catholic ambassadors out a second-story window. Fortunately, the ambassadors survived. Unfortunately, they survived because they landed in a heap of horse manure. Historians have named this foul-smelling event the “Defenestration of Prague,” which proves once and for all that historians have no sense of humor when it comes to naming events.

The Defenestration of Prague—or, as I prefer to call it, “The Great Stinky Second-Story Window Tossing”—was how the Thirty Years’ War began, though they didn’t call it the Thirty Years’ War then because they didn’t know how long it was going to last. In Central Europe alone, at least ten million people died during this conflict. Not a joyous occurrence, no matter how humorously the war began.

The year 1618 also marked a moment of theological conflict among Protestants in Holland. This conflict involved no windows and no excrement. In fact, by the early twentieth century, this conflict would be summarized by a flower—a tulip, to be exact. The conflict had to do with election. No, not a first-Tuesday-in-November democratic election. This conflict concerned divine election.

:: Dutch Difficulties from Dirck to Dort ::

According to Scripture, every Christian is “elect according to the foreknowledge of God the Father” (1 Peter 1:2). This election isn’t based on any human choice but solely on God’s gracious predetermination (Romans 9:11)—or at least that’s what a long line of Christians throughout history have believed when it comes to divine election. Not everyone has accepted this viewpoint, of course—but a clear series of Christian thinkers stretching from the ancient church through the Middle Ages and particularly among the Reformers embraced this perspective.

In the late 1500s, a Dutch thinker named Dirck Cornhert—yes, seriously, that was his name!—came up with a radical suggestion for dealing with doctrinal differences: Until God sends a new apostle to tell Christians exactly what to believe, Protestants and Catholics should lay aside their distinctive doctrines and join together into one theology-free church.

One summary of faith that Cornhert specifically rejected was the Heidelberg Catechism, a statement that happened to be quite important to the Dutch Reformed churches. Not surprisingly, this recommendation didn’t go over well in Holland.

A young professor named Jakob Hermanszoon was enlisted to defend the teachings found in the Heidelberg Catechism, particularly the parts that had to do with election. But Hermanszoon lost the debate before it even began! As he studied for the debate, he became convinced that the Reformers had been wrong about the whole issue of election.

According to Hermanszoon, God has placed in every person just enough goodness and grace—he called it “prevenient grace”—to choose whether or not to trust Jesus. As a result, God’s election wasn’t really God’s choice at all; God simply noticed ahead of time who would choose him and then chose them back.

Hermanszoon died in 1609, but his followers continued to develop his ideas. His followers became known as “Arminians” because, whenever they called themselves “Hermanszoonians,” everyone around them politely replied, “Gesundheit.” (Okay, so I made that part up. Actually, the Latin form of the Dutch “Hermanszoon” is “Arminius” which is a lot easier to say than “Hermanszoon”—and that’s why, if you’ve heard of Hermanszoon before, it was probably under his Latinized name “Jacob Arminius.”)

Soon after Hermanszoon’s death, his followers published a document known as the “Remonstrance.” The Remonstrance spelled out five particular points where the Arminians disagreed with the theologians of the Reformation.

These five points resulted in a conflict that threatened to tear apart the Reformed churches of Holland. A Dutch prince tried to end the conflict by inviting Reformed pastors throughout Europe to gather in the city of Dort to draft a declaration of their beliefs. In 1618 and 1619, the Synod of Dort responded to the five points of the Arminian Remonstrance with five points of their own. Their five responses became known as “the Canons of Dort.”

What the Arminians said in the Remonstrance: “God, by an eternal, unchangeable purpose in Jesus Christ … before the foundation of the world, … determined … to save … those who … shall believe on this his Son Jesus, and shall persevere in this faith and obedience of faith, through this grace, even to the end.” God’s election was conditional, based on foreseen human faith and perseverance.

How the Reformed responded in the Canons: “Before the foundation of the world, by sheer grace, … God chose in Christ to salvation a definite number of particular people. … This election took place, not on the basis of foreseen faith … but rather for the purpose of faith.” God’s election was unconditional; God chose not because he foresaw faith but because he planned to give faith as a gift.

What the Arminians said in the Remonstrance: “Jesus Christ …died for all men and for every man, so that he has obtained for them all … redemption, and the forgiveness of sins; yet that no one actually enjoys this forgiveness of sins, except the believer.” Jesus purchased redemption for every person. If anyone refuses to believe in Jesus, their refusal thwarts God’s work of redemption their life.

How the Reformed responded in the Canons: “This death of God’s Son is … more than sufficient to atone for the sins of the whole world. … It was God’s will that Christ through the blood of the cross … should effectively redeem from every people, tribe, nation, and language all those and only those who were chosen from eternity to salvation and given to him by the Father.” The death of Jesus secured the salvation of all whom God in his grace chose before time.

What the Arminians said in the Remonstrance: “Man … of and by himself can neither think, will, nor do anything that is truly good; … it is needful that he be born again of God in Christ, through his Holy Spirit.” Although fallen human beings cannot in themselves do good, God has placed “prevenient grace” in all people, so they can believe and be born again.

How the Reformed responded in the Canons: “All people are conceived in sin and are born children of wrath, … neither willing nor able to return to God.” Humans are, by nature, spiritually dead; humanity’s fallenness is so great that no sinner desires to trust in Jesus until he or she is made alive through the work of God’s Spirit.

:: The Fourth Point: Operation of Grace ::

What the Arminians said in the Remonstrance: “As respects the mode of the operation of this grace, it is not irresistible.” Regeneration is God’s immediate response when a sinner chooses Jesus; sinners can resist, reject, and thwart God’s attempts to save them.

How the Reformed responded in the Canons: “Regeneration … is an entirely supernatural work. … All those in whose hearts God works in this marvelous way are certainly, unfailingly, and effectively reborn and do actually believe.” Though people do resist the Holy Spirit up to the time when God brings about new life in them, God transforms the person at the time of the new birth—or regeneration—in such a way that the sinner desires to trust Jesus and, as a result, freely chooses faith.

What the Arminians said in the Remonstrance: “Those who are incorporated into Christ, … Jesus Christ assists them … and, if only they are ready for the conflict, and desire his help, and are not inactive, keeps them from falling. … Whether they are capable … of forsaking again the first beginnings of their life in Christ, … that must be more particularly determined out of the Holy Scriptures.” Perseverance depends on the will and work of the believer; it is uncertain whether a believer can forfeit his or her salvation.

How the Reformed responded in the Canons: “God … does not take the Holy Spirit from his own completely, even when they fall grievously. Neither does God let them fall down so far that they forfeit the grace of adoption and the state of justification. … God preserves, continues, and completes this work by the hearing and reading of the gospel, by meditation on it, by its exhortations, threats, and promises.” Perseverance depends on God’s will and work; God works in the lives of Christians so that they persevere in faith to the end.

Of course, the Synod of Dort didn’t settle this issue once and for all. To this day, Christians discuss and sometimes divide over the issues that the Arminians raised in the Remonstrance. Over time, the Canons of Dort became known as “the five points of Calvinism”—even though they didn’t emerge until decades after John Calvin was dead. Despite such difficulties, the five points do provide a helpful summary of the Reformed perspective on how and why sinners trust Jesus.

:: Troubled by TULIP? A Proposal for PROOF ::

What has been far less helpful for healthy discussions of Calvinism is a five-point acrostic that emerged in the early 1900s. This acrostic rearranges and renames the Canons of Dort to spell the word “TULIP.” In this reformulation, the five points become:

TULIP has only been around for a century or so, and I certainly understand the appeal of the acrostic. It’s a Dutch flower, after all, and it makes the five points quite easy to recall. And yet, this memory device has grown to dominate discussions of Reformed theology in ways that have rarely been fruitful.

“Total depravity,” for example, gives the impression that unsaved people are as bad as they can be, which isn’t at all what any Reformed theologian has claimed; plus, “total depravity” sounds like some sort of cable television show that no Christian should be watching in the first place. The “L” in the TULIP doesn’t catch the qualification in the Canons of Dort that the death of Jesus was “more than sufficient to atone for the sins of the whole world.”

So here’s a proposal for a different memory device—one that’s truer to Reformed theology and far more helpful for discussions of Calvinism:


Daniel Montgomery and I are currently working on a book that unpacks this vision for theology.

In the meantime, here are some devotional guides on the five points as well as a children’s book that works through these doctrines of divine grace.