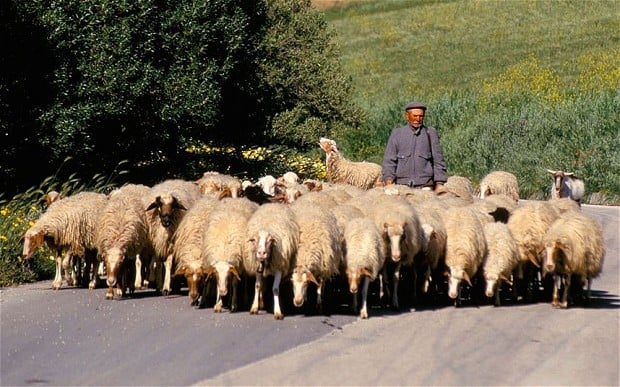 This post adapted and abridged from The God Who Goes Before You, by Michael S. Wilder and Timothy Paul Jones (Nashville: B&H, forthcoming).

A couple of years ago, an individual who thought he might be called to pastoral ministry informed me, “I love to teach, and I want to preach—but I can’t stand people.” He went on to describe his dream position: to provide a polished exposition of Scripture every Sunday morning, to decide the church’s vision and direction, but never to deal directly with the people in the congregation. It was a pleasant-sounding dream with one fatal flaw: No such position exists in the very Scriptures that he claimed he wanted to proclaim.

What this young man needed wasn’t merely an improvement in his people skills—though, frankly, he could have used that too. What he needed was to understand the difference between cattle and sheep.

So what does all of this have to do with differentiating cattle and sheep?

Cattle might meander among the oaks of Bashan or find themselves being fattened in pens (Amos 4:1; 6:4); either way, their tending never required their keepers to live among them.

Sheep, on the other hand, need a shepherd, and shepherds live among their sheep.

The young man who declared he wanted to be a pastor but didn’t want to deal with people was contradicting himself. You can’t be a shepherd—the very meaning of the word pastor!—without living among the sheep.

The struggle to live as a shepherd is not new, of course. Leaders who failed to care for their flocks were, in fact, part of the problem that the prophet Ezekiel saw in the sixth century B.C. when he looked at the rulers of Israel. Ezekiel’s inspired pronouncement did not point his people toward some new leadership technique; instead, the prophet pointed them toward the sacrificial life of a leader yet to come.

Even in the nations that surrounded Israel, “shepherd” functioned as a metaphor for rulers and gods—but Israel’s kings were called to shepherd God’s people in a very different manner than the rulers of the nations. The kings of Israel were never to present themselves as royal owners of the flock. God alone was the Lord of Israel, and the people were his property. The kings were under-shepherds. Like shepherds in the field tending the flock of a higher lord, the kings of Israel were responsible to live among their subjects, to guide them, and to guard them for God’s glory. Every king was to keep the Scriptures at his fingertips precisely so that his heart would never be “lifted up above his brothers” (Deut. 17:20). The kings were to tend not only to the people’s political needs but also to their need for Word of God.

But the kings of Israel and Judah failed. In the decades after David, they began to treat God’s people as their own property. According to Ezekiel, they failed to feed God’s flock (Ezek. 34:2).

They left the weak lambs to fend for themselves, and they took no time to seek the sheep that were lost (34:3-4). They lived like lords instead of serving as under-shepherds. Instead of serving among the people of God’s flock, these kings “ruled them” with “force and harshness” like Pharaoh in the days of Moses (Ezek. 34:4; compare Exod. 1:13-14). The protectors became predators. The people became like sheep without a shepherd, scattered and slaughtered for the sake of their rulers (34:3, 6).

Fixing this failure would require something far more radical than a tweak in the shepherding habits of human kings. The sole solution would be the arrival of God himself. The Lord of the flock would live among his people as their shepherd (Ezek. 34:12). God himself would show up to seek out his scattered sheep, to separate the sleek from the weak, and to fill the feed-troughs of the oppressors with judgment (34:11, 16-22). Once again, it would be clear that these people were the property of God alone.

God did not, however, give up on working through the offspring of Eve! He predicted through Ezekiel that he would raise up a human ruler as well: one like David, who would live not as a sovereign but as a servant, a prince, and an under-shepherd (34:23-24). This ruler would live “among” his flock, and God himself would remain “with them” forever (34:24, 28-30).

All of this was partly fulfilled in the post-exile period—but only partly. On our side of the cross and empty tomb, it’s clear that Jesus alone provided the ultimate fulfillment of both predictions. As God enfleshed, he was the rightful Lord and King of his people. Yet he willingly became not only the servant and the shepherd but also the sacrificial lamb. The shepherd was stricken by God for sins that were not his own and then rose to life to gather his own from every nation (Zech. 13:9; Matt. 26:31-32; 28:19; John 10:14-18; Rev. 7:9-17).

As he gathers his own, Jesus the exalted Shepherd King has chosen once again to work through human shepherds. In the Gospels, the apostles began as sheep (Matt. 10:16) but wound up as shepherds (John 21:15-18) who then recognized other God-appointed men as shepherds of this flock (Eph. 4:11; 1 Pet. 5:1-2). Yet, now as in the days of Ezekiel, God himself remains the chief Shepherd, the true owner of the sheep (Heb. 13:20; 1 Pet. 2:25; 5:4). Pastors are not lords of the sheep but servants of the King, called to imitate the chief Shepherd.

So what does all of this mean for pastoral leaders in the church of Jesus Christ?

1. Shepherd leadership calls for feeding the flock. The primary responsibility of the shepherd is to provide nourishment for the flock (Ezek. 34:2). So it is in church life, the pastor must consider that his leadership is most strikingly demonstrated through his teaching and preaching ministry. The Chief Shepherd was known as one who taught with great authority (John 1:29; Matt. 7:28-29). Remember when Jesus invited his disciples to retreat to a deserted place? When they arrived, the spot was no longer deserted because the people had anticipated where Jesus might be headed. Compassion welled up within Jesus when he saw the people because “they were like sheep without a shepherd.” His immediate response is telling: “he began to teach them many things” (Mark 6:34).

Later, along the shores of Galilee, Jesus prepared breakfast for the disciples. This post-resurrection appearance concluded with Jesus asking Simon Peter three times, “Do you love me?” The response to Peter’s affirmations of love were, “Feed my lambs. … Tend my sheep. … Feed my sheep.” Peter was reminded that he had been called to serve Christ by being a servant who feeds the flock. It was through feeding God’s people he was to demonstrate authentic love for the Chief Shepherd.

Pastoral leadership is rooted in the responsibility of living as an under-shepherd with eyes fixed on the Chief Shepherd. True compassion for people and love for God compels the pastoral leader to make Christ known through the teaching of God’s Word.

2. Shepherd leadership calls for guarding the flock.In God’s rebuke against Israel’s leaders, he indicted them as predators rather than protectors. The rulers of Israel were devouring the flock for their own gain so that God’s sheep were scattered and became “food for all the wild beasts” (Ezek. 34:3, 5, 8). God, who who would reverse the evils of the leaders, declared that he would rescue his sheep and give them rest so that they would no longer be prey (Ezek. 34:12, 14, 15, 22). A mark of divine leadership is protection. So it is with shepherd leaders in Christ’s church, each is to be on guard for the lions who prowl and for the wolves who shroud themselves in the skins of sheep.

3. Shepherd leadership leads to sacrificial service among the flock.Jesus, the model shepherd, makes this clear in his words to the Pharisees: “the good shepherd lays down his life for the sheep” (John 10:11). This is exactly what Christ did on our behalf through his finished work on the cross. It is no wonder then that, immediately after calling Peter to feed his sheep, the resurrected Jesus also called Peter to follow him to the point of death (John 21:18-19).Yet there are pastors who choose instead to live as self-centered shepherds, much like the rulers of Israel described in Ezekiel’s oracle. This lifestyle is recognizable by its egocentric nature, materialistic preferences, and abuse of power.

But there is another category of shepherds in the church—those that are flock-centered. This descriptor sounds positive, but it too falls short of authentic imitation of the Chief Shepherd. These leaders encourage their sheep and may even know their sheep, but they are marked by a desire to keep the flock happy and satisfied. They keep peace in the fold at any price. This well-intended desire can lead to unwillingness to deal with sin or false teachings. The result is contentment to gather with the ninety-nine–and to gather more “ninety-nines”–without seeking or correcting the one who wanders (Ezek. 34:4-5, 8; Matt 18:12-14; Lk 15:1-7). This approach to shepherding ultimately produces weakened churches and a diminished display of God’s holiness and glory.

Leaders who understand their role as shepherds do not peer down at their people from a holy hayloft and drop an occasional bale of sustenance in the form of a finely-crafted homily. Neither do they allow their flocks to live in false peace. Shepherd leaders live among their people and pay “careful attention … to all the flock” (Acts 20:28). They see themselves neither as sovereigns over their churches nor as hirelings of their churches but as under-shepherds of the living God.

This post adapted and abridged from The God Who Goes Before You, by Michael S. Wilder and Timothy Paul Jones (Nashville: B&H, forthcoming).