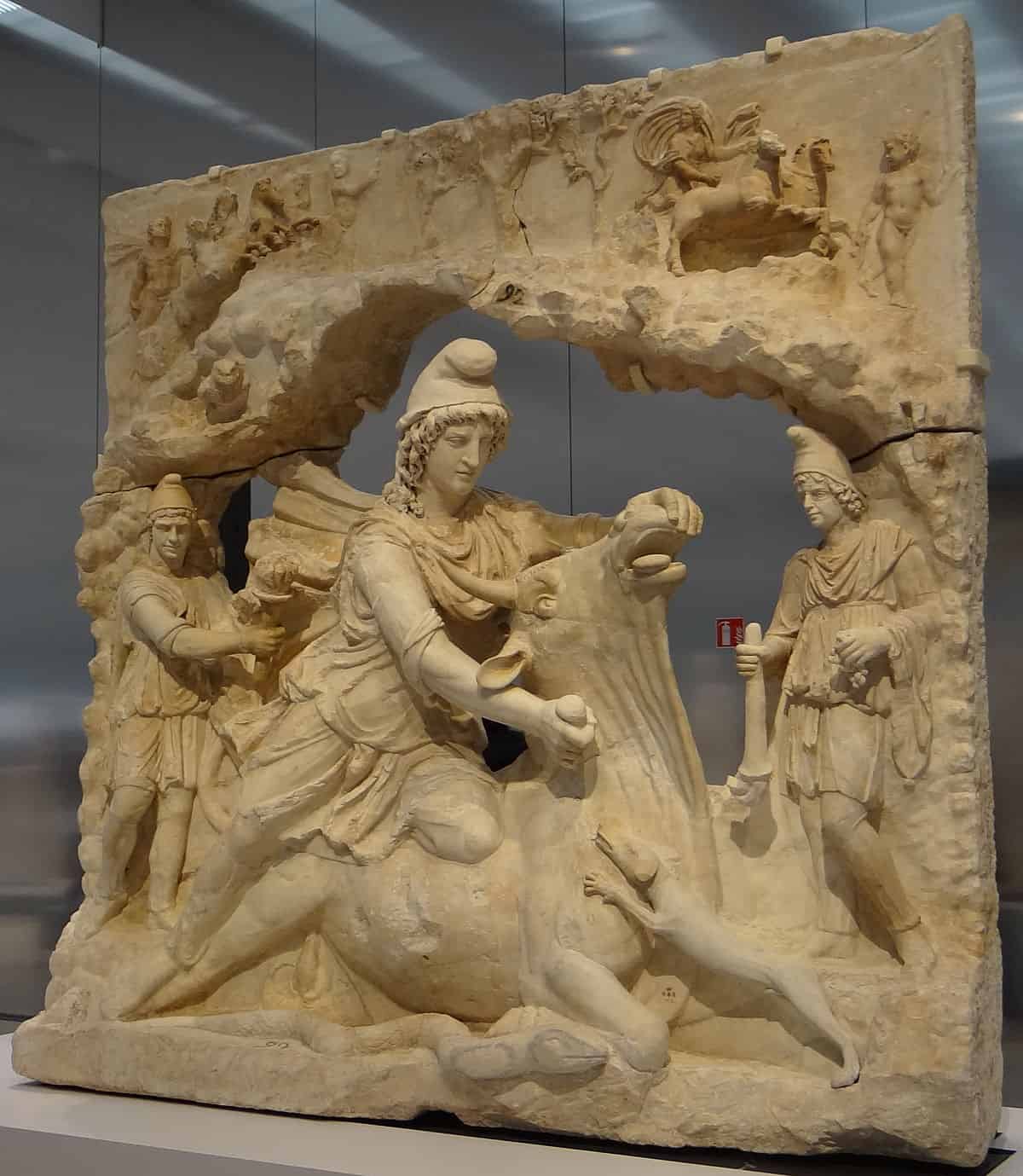 It’s an accusation that’s been around a long time. Even in ancient times, critics of Christianity noticed some parallels between Christian beliefs and pre-Christian myths. In the late second century, a pagan philosopher named Celsus charged, “The Christians have used the myths of Danae and the Melanippe, of the Auge and Antiope in fabricating this story of virgin birth!” In more recent times, skeptical scholars such as Marvin Meyer and Robert Price have claimed close connections between the resurrection of Jesus and the myths of dying and rising deities that marked many pagan myths.

In the simplest possible terms, here’s what these critics contend: The most marvelous claims in the Gospels—a miraculous birth, for example, as well as the idea of a deity who dies and rises again—are paralleled in pagan religions that predate Christianity; therefore, early Christians must have fabricated these miracles based on their knowledge of pre-Christian religions.

To be sure, there are some surface-level similarities between ancient myths and certain events in the Gospels. Long before the first century A.D., the myths of Egyptians deities such as Osiris, Adonis, Attis, and Horus included tales of death and rebirth. The Persians venerated Mithras, a deity who (according to some claims) was born of a virgin and who died and then rose from the dead. Sacramental bread and the fruit of the vine make appearances in a few mystery cults as well.

So why should anyone see Jesus as being distinct from the pagan gods? Could it be that the New Testament stories of Jesus represent the fictive myth of an ancient mystery cult that’s survived for two thousand years? Or is there something different about the accounts of Jesus’ time on planet earth?

1. The Pagan Parallels Aren’t as Parallel as Some Proponents Claim

In the first place, it’s important to be aware that most of these supposed pagan parallels aren’t nearly as parallel as the skeptics suppose. When the actual sources behind the pagan myths are closely examined, the supposed parallels have little in common with the New Testament narratives.

For example, there are dying and rising gods in some pagan myths—but these deities died and arose each year, certainly not the same pattern as Jesus’s once-for-all sacrifice for the sake of others. And the pagan myths of miraculous births are closer to divine impregnation—a mortal woman conceives a child as a result of sexual relations with a god—than to the virginal conception described in the Gospel According to Matthew and Luke.

To exemplify how these supposed parallels aren’t nearly as parallel as the critics claim, let’s take a look at one particular mystery-cult myth that’s often presented as a predecessor to the New Testament, the myth of Mithras.

So what about Mithras’ miraculous birth?

According to some reconstructions of the ancient sources that describe the birth of Mithras, Mithras was birthed from solid stone, and he got stuck on the way out. Some nearby persons in a field pulled him from the stone, which left a cave behind him. (In my imagination, I envision this supposed scene happening like this.) Some skeptics connect this birth to the birth of Jesus in a stable with shepherds arriving soon afterward. A few even refer to this birth of Mithras as a “virgin birth”!

But referring to this rescue of Mithras from stone as a “virgin birth” seems to me to be somewhat of a stretch.

I mean, I guess that birth from a rock is sort of a virgin birth. But how can you tell if a rock is a virgin, anyway? And how precisely do rocks lose their virginity?

Parallels of this sort are too vague and too dissimilar to support the claim that Christians borrowed their beliefs from pagans of previous generations.

James Tabor, a professor at University of North Carolina, doesn’t believe in the virginal conception of Jesus, and he denies that Jesus rose from the dead. Yet even he is able to see how radically the birth of Jesus in the New Testament Gospels differs from any supposed pagan parallels:

When you read the accounts of Mary’s unsuspected pregnancy, what is particularly notable … is an underlying tone of realism that runs through the narratives. These seem to be real people, living in real times and places. In contrast the birth stories in Greco-Roman literature have a decidedly legendary flavor to them. For example, in Plutarch’s account of the birth of Alexander the Great, mother Olympias got pregnant from a snake; it was announced by a bolt of lightning that sealed her womb so that her husband Philip could not have sex with her. Granted, both Matthew and Luke include dreams and visions of angels but the core story itself—that of a man who discovers that his bride-to-be is pregnant and knows he is not the father—has a realistic and thoroughly human quality to it. The narrative, despite its miraculous elements, “rings true.”

Let’s take a quick look at a few of the supposed parallels between Jesus and Mithras:

Supposed parallel: Mithras had twelve followers.
Significant problem: One piece of ancient artwork depicts Mithras surrounded by twelve faces, but there is no evidence that these were “disciples” of Mithras. In fact, Mithras had only two companions, Aldebaran and Antares.

Supposed parallel: Mithras was identified as a lion and a lamb.
Significant problem: There is no surviving evidence for the connection of Mithras to a lamb. Mithras was identified as a lion. However that imagery for a royal ruler existed among the Israelites (Genesis 49:9) several centuries prior to the emergence of any Mithraic myth; the New Testament writers were using familiar Jewish imagery when they depicted Jesus as a lion.

Supposed parallel: Mithras initiated a meal in which the terminology of “body and blood” were used.
Significant problem: The earliest evidence of such terminology in the context of Mithraism is from the mid-second century—nearly one hundred years after the Gospels were written. In this instance, it is far more likely that Mithraism borrowed from Christian practice.

Supposed parallel: Mithras sacrificed himself for the sake of others.
Significant problem: Mithras is frequently depicted in the act of sacrificing a bull—but Mithras himself never becomes the sacrifice.

Supposed parallel: The resurrection of Mithras was celebrated on Sunday.
Significant problem: There is no surviving evidence from the pre-Christian era for a celebration of a resurrection of Mithras on the first day of the week, though the followers of Mithras—and of other sun-related deities—did worship their gods on Sunday. The reason for the emphasis on “the first day of the week” in the New Testament Gospels was, however, more closely tied to the fact that, in Genesis 1, God’s work of creation began on the first day. The implication was that, through the resurrection of Jesus, God was initiating a new beginning, a re-creation of his world.

2. Claims of Parallels in Pagan Myths Confuse the Historical Claims of the New Testament with Later Christian Practices

What’s more, proponents of these parallels consistently conflate later Christian traditions with what’s found in the Gospels. It’s true, for example, that pagan festivals occurred around the time when Christians later celebrated Christmas—but the New Testament documents never suggest a date for the birth of Jesus in the first place! The identification of a date to celebrate Christmas occurred centuries after the time of Jesus; Christians probably arrived at a date near the winter solstice because of an early tradition that Jesus was conceived on the same date that he died, and nine months after Passover landed the birth of Jesus in late December. In any case, since the New Testament makes no claims regarding the date of Jesus’ birth, the celebration of Christmas is irrelevant when it comes to a discussion of whether the New Testament description of Jesus’ birth is rooted in real historical events.

The same holds true when it comes to connections between pagan fertility festivals and later Easter celebrations. The term “Easter” comes from “Ishtar,” a Sumerian goddess who died, arose, and ascended, and several familiar Easter motifs originated in pagan fertility cults. Yet, except for a mistranslation in Acts 12:4 in the King James Version, no New Testament text even mentions Easter! The pagan roots of later Easter imagery have nothing to do with the historicity of the Gospels.

Likewise, later Christian art incorporated both Egyptian and Mithraic motifs, especially when depicting Jesus and his mother. Yet later depictions of pagan myths in Christian art has nothing to do with whether the events in the New Testament actually occurred. It simply means that Christians artists could have been a bit more creative when choosing sources for their inspiration.

What If Pagan Parallels Do Exist?

Let’s suppose for a moment, though, that some patterns that were present in the life of Jesus could be pinpointed in some previous religion. Would this weaken the historical foundations of the Christian faith, as critics claim?

The real question isn’t, “Are there similarities between the New Testament’s descriptions of Jesus and some previous pagan myths?” Perhaps there are—although I must admit that every ancient parallel I’ve examined has turned out to be vague and weak when examined in its original context.

The crucial question is, “Did the events described in the New Testament actually occur?”—and the answer to this question doesn’t depend on parallels in pagan practices.

Parallels in other ancient religions neither prove nor disprove the authenticity of the New Testament documents. They simply demonstrate the common expectations of people in the first century A.D. Even if some clear parallel did exist between the story of Jesus and previous religious expectations, this wouldn’t warrant the belief that the apostle Paul or the authors of the New Testament Gospels “borrowed” these tenets from other faiths. It would mean that, when God dropped in on the human race, he chose to reveal himself in ways that the people in that particular culture could comprehend. If that’s indeed the case, it would merely mean that the myths of dying gods and miraculous births are rooted in longings that run deeper than human imagination; although the pagan religions twisted and distorted these motifs, they are rooted in a God-given yearning for redemption through sacrifice that makes the world right and new. C.S. Lewis addressed this possibility with these words:

In the New Testament, the thing really happens. The Dying God really appears—as a historical Person, living in a definite place and time. … The old myth of the Dying God … comes down from the heaven of legend and imagination to the earth of history. It happens—at a particular date, in a particular place, followed by definable historical consequences. We must not be nervous about “parallels” [in other religions] … : they ought to be there—it would be a stumbling block if they weren’t.

When it comes to parallels between the New Testament story of Jesus and the myths of pagan gods, the supposed connections are not sufficiently parallel to claim that Christian faith is borrowed. Even if some parallels were indisputable, the parallels merely mean that God worked out his plan in a manner that matched the context within which “the Word became flesh and pitched his tent among us” (John 1:18).

So what should you do the next time someone pulls out a pagan parallel?

(1) Locate the primary source. With the rarest of exceptions, the primary sources—that is to say, the actual ancient texts that describe the pagan practices—do not include any real parallels to the New Testament.

(3) Determine whether the supposed pagan parallel connects to the New Testament or to later Christian traditions. Connections between pagan practices and later patterns in Christian worship or holiday celebrations may be interesting—but these links have nothing to do with whether the New Testament accounts of the life of Jesus are historically accurate.